If a family decides to take in a dog, it often does the same for the children. Children usually want to have a pet at some point, that is almost a natural law;) Whether hamster, rabbit, mouse, rat, cat or dog – something furry is needed. It would be interesting to research why this is so. I could imagine that the reasons can be very different. For me, of course, the desire for a dog also came up in early childhood, because I always thought dogs were great, my girlfriend also had one and such a journey, who would support me emotionally in the struggle of growing up and feeling unintelligible – that would be been great. But unfortunately – or luckily for the dog? – I was not granted that.

So a dog, possibly a puppy, comes into the house, and now the dog and children should live harmoniously with each other, become pretty best friends, inseparable and go on adventures together. A bit like the 5 friends. Or Lassie.

And maybe in many cases it works the same way. But in many cases I don’t know either. Parents sometimes have strange ideas about how dogs and (small) children live together.

So a former customer once asked me what she could do so that her three-year-old son became the caregiver of the puppy because she didn’t feel like it herself. The puppy was referred after a few weeks because he did not meet expectations: he constantly pinched the son in his hands and arms while playing, he peed in the apartment, he bit shoes – he was just not the nice soft toy with a bit Life of its own that only moved when asked to do so.

The parents are responsible – always!

Unfortunately, parents are often not aware that they are responsible for the animal. And the smaller the child, the safer it is. Of course, children are fired up at the beginning and promise death and the devil to help with the unpleasant tasks. But children are children. And so the new toy very often loses interest. And you can’t blame them either. They are far too young to take responsibility and to be aware of the scope of all duties.

So parents have responsibility for the animal. But not only that! You are also responsible for managing and monitoring the handling of children and animals. And from there it often becomes really difficult – usually for the animal. Maybe because many adults naturally focus on the children, but not on the dog. They don’t even notice if a dog is mistreated. They don’t see it or they think that “he must be able to do it”. After all, the dog literally has the task of walking along without any effort, because there is no time for the child-rearing ,child anyway – and to function.

The fact that a dog can have a rather idiosyncratic interior, that depending on the situation, it can have difficulties with certain situations and that it requires a time-intensive upbringing so that family harmony can be established permanently – many people are actually not aware of this.

Children must learn to treat animals with respect

When I partially see how children deal with their “best buddy” without parents intervening, the hair on the back of my neck is raised. But of course the children cannot be blamed, they don’t know better, they have to learn it first! From responsible parents!

The playing behavior of children and dogs is very different, as are the needs of children and dogs. Generally speaking, children are loud, hectic and often shrill. They run, bounce, screech, howl and behave spontaneously and incalculably. These are the qualities that at least sometimes upset a reactive dog: his level of arousal will shoot up, and it is quite possible that he will start to rush or jump up, that he will start barking excitedly or even exuberantly snap. If there are no common rules in such cases, the child-dog relationship will be very difficult.

Of course, a healthy dog ​​can learn to endure the – soberly – less dog-friendly properties of children. Of course, it would be an advantage here that he grew up in a household where children lived from birth. So if I had small children and wanted to buy a dog, I would definitely only choose a dog that already had contact with children as a baby. And positive! Nevertheless, this is not a guarantee that the dog will get along well with children later. 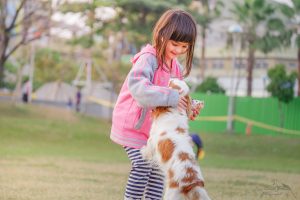 Keep stress down for dogs

Dogs in households with small children naturally have a lot to endure. Unfortunately, this is often not noticed. It starts with the fact that the actions of children very often do not give the dog anywhere near the sleep and rest that it needs to grow into a chilled dog. A puppy should sleep and rest for 20 to 22 hours, an adult dog for up to 18 hours. If parents do not pay attention, it quickly happens that the children disturb the dog in its resting phases. However, a dog that does not get enough rest in the long run often develops into an unbalanced dog whose level of arousal never really goes down. And a dog that is permanently at a high level of arousal will not become an easily bad dog and can even grow into a danger.

Parents have an obligation to recognize that the dog is not just a beautiful member of the family, but as such is also taken seriously

Because like a child, a dog needs attention, time, and patience to teach him things. If this time is not spent, something will get out of hand very quickly.

Rules for everyone prevent misunderstandings

Parents should set up rules, all of which must be followed without any ifs and buts to ensure the needs of the animal and the safety of the child. Only if these rules are followed does the dog have the chance to become mentally strengthened and to become a relaxed dog, and this is the only way to avoid dangerous accidents.

Children should be taught from the beginning that animals should also be treated with respect and that animals as well as people have emotions that can be both positive and negative in nature. An animal is not a soft toy that can be carried, tugged and shaken around. An animal has needs, likes and dislikes like we humans do. And above all, each animal has its own character. And while there are also many dogs that can bear the unpleasant without complaint, there are also as many dogs that do not. However, if a dog defends itself and hits the child, the damage is usually quickly quite large and instead of thinking about what could have gone wrong, these dogs are then handed over, because they bit “without warning” and are now classified as “dangerous” and “unpredictable”. In most cases, of course, this is an avoidable, self-inflicted situation due to a lack of caution, indifference, negligence and misjudgment. In most cases, the dog has tried to communicate long before that something is uncomfortable, that it feels uncomfortable or under pressure. Unfortunately, these friendly signals, which for example can start with a head turn, are not noticed. As soon as the dog becomes more aggressive, there is of course an intervention or the dog gets the distance he wants. The dog learns that he is only understood when he “speaks” more clearly,

Rules are extremely important if you want to avoid escalations and get close to the dream of “the best buddy of the child”. So it would be very desirable that children should NEVER do the following :

Those who implement such rules kill two birds with one stone: the dog has the chance to feel safe and secure even in a busy children’s household, there is no need for him to develop undesirable behaviors that would endanger the children.

The children learn for their lives to respect other living beings and to deal with them in a way that they would wish for themselves. As parents, we also don’t watch – I hope – how our child hits someone else’s head with a shovel. So a child should learn that it doesn’t matter whether it’s another child or an animal.

And maybe this way, dog and child actually become the pretty best friends we dream of in our ideal.