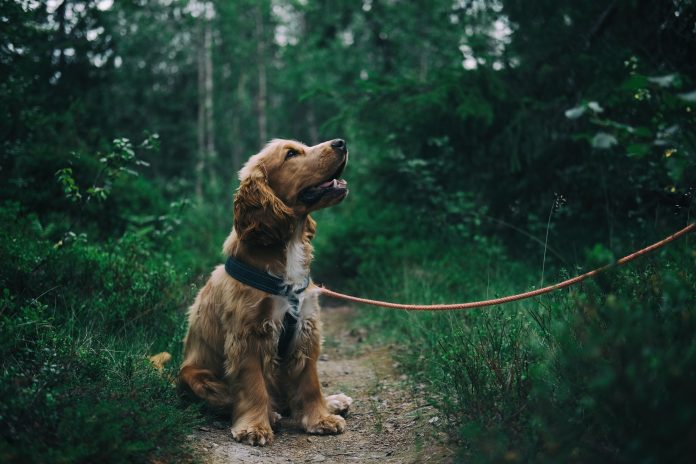 “… and then he suddenly freaks out completely: yap, jump up on me, bite into my jacket … what can I do about it?”

At this point you can often hear the advice to get the dog out of it properly, because he is obviously not underutilized. So the walks are extended, dog buddies are romped around and if you already do that, you look for an agility course or let the dog run on the bike. Or both. He is also enthusiastic about it, but is still freaking out … then you just put the ball in while walking, chasing it is obviously fun.

And not only that: He is really demanding that!
As soon as you are back home, he comes and wants to trick!
He just doesn’t get calmer …

Because the other way around it turns into a shoe: Dogs need a lot more rest than their humans can often imagine.

Depending on age and health, a dog can and should rest an average of 17 to 22 hours a day. So sleep, doze, dream, lie around relaxed. Of course, it does not hurt if he is sometimes active longer, but if dogs get too little rest permanently, they react like children who have missed the right time to go to bed: They are becoming more and more active, more and more wild, finally over-revving and become uncomfortable.

This also applies to those breeds that you hear about again and again, they need an above-average amount of movement. Above all, the following applies to young dogs:
The rule of thumb for puppies and young dogs is “5 minutes walk at a time”.

Yahaha, they don’t look at the clock while playing and romping, but unlike a walk, you can decide here when you want to take a break. And so you can actually sometimes see puppies falling asleep in the middle of the game hour. However, many young dogs still have no idea when they have enough – you have to break or take them out of the situation at some point so that they can recover.

“But he’s totally enthusiastic about it … if he didn’t want to, he wouldn’t have to!”

… We have selected most dog breeds for cooperation with humans, possibly for a ” Will to please “, and if we then wave with a leash or ball, they do us a favor – even if they would rather take a nap by themselves . At some point, some dogs will not be able to do this themselves: they will not come to rest without help. A vicious cycle begins.

“If I did so little with that, he would take my apartment apart!” …

This can certainly happen: once I have accustomed my dog ​​to a high level of activity and he is unable to calm down, he tries to backtrack the program to a healthy level overnight .

But I don’t have to let it get that far – especially with young dogs: if my dog ​​over revs towards the end of the walk, the next one should be shorter and / or less eventful. Then there is romping with other dogs or attending the dog school not on top of that, but instead.

A diary may help here, in which I note how long we were on the road and what exactly we did: were we relaxed strolling in familiar surroundings or were we in new, exciting places? Did we train or play something? Have there been dog encounters?

A walk that seems completely normal to us can be a very exciting thing, not only for young dogs: an unknown environment can be very stressful for an unsafe dog, for another it may be dog encounters and if he struggles with fear dog can be completely exhausted even after a few minutes.

In addition, what has been learned only moves from short to long-term memory when the brain takes a break (a relaxed walk, or a game with a good buddy can be such a break, but not every dog). New experiences are processed during sleep: This applies above all to puppies, but also to adult dogs. 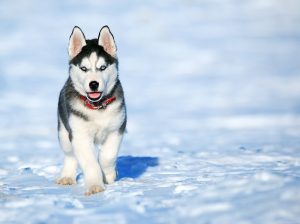 My dog ​​Oskar, for example, already learned as a puppy that horses are uninteresting: If we meet one, he sorts himself next to me on the side facing away from the horse and we calmly walk past it. He has not needed a corresponding signal for years.

But then we have the opportunity to visit a friend’s horse in his box! First he takes cover behind me and takes a nose with a very long neck. A moment later, he ventures closer. And then the big animal lowers its head to him and sniffs him!

Oskar is deeply impressed. Since the horse is a relaxed and friendly contemporary, the encounter remains completely unspectacular. But although we don’t do anything else, my dog ​​sleeps soundly for two hours.It was so exciting !

A dog is not well used when he has had hours of exercise and activity, but when he appears relaxed and satisfied. And even those dogs, where everything fits perfectly, do not harm occasional rest days. However, the day of rest does not mean that the big round lasts only one hour today and I slack off practicing different signals such as “foot” and “stay”.

Day of rest means: We go outside to solve and we’re done. And no, it is not tricked at home either. If I get so sick that I can’t get any more, my dog ​​will be fine with it – he has learned that on some days nothing is necessary.

The same applies to the workload before being left alone: ​​Of course it is more pleasant and less boring if you are alone while you are can rest from a nice walk. But also here applies: If this should not be possible, my dog ​​has it much easier if he knows such situations – so I also practice them from time to time.

And if the previous day was exhausting for him, such comes “ Today we practice boredom! “Day often just right.

But what to do if it does happen?

Interrupt the behavior with a strict “No!”?
The word “no” as such has no meaning for our dogs at first – they first have to learn what we want to tell them: that we disagree with their behavior.

Unfortunately, most of them learn it by using a loud and sharp tone or by adopting a posture that appears threatening to them. Or the “no” is followed by an unpleasant consequence, such as a jerk on a leash.

A nudge “to get his attention” is one of the unpleasant consequences for dogs (and honestly, most people don’t like that too).

So we intimidate them and thereby inhibit their behavior. However, the problem that triggered the behavior remains. In addition, we do not tell them what we want from them instead .

Of course, you can train a “no” to ask for a desired alternative behavior, but when you overturn it is the case that the dog shows the behavior because he cannot do anything else – not because it would be fun.

Even if he manages to show the desired alternative behavior – his problem remains.

“Then I let him sit or walk until he calms down.”

” Sitting “, ” at foot ” etc. are signals in which our dogs should do what we want them to do attentively and with concentration. Especially in exciting situations, they require a lot of self-control. Dogs overturn, however, when far too many stimuli have poured in on them. Then there is no longer any ability to concentrate! And not self-control anyway – otherwise they wouldn’t freak out in the first place.

For ourselves, in such a situation, we would probably try a relaxation exercise or at least a deep breath rather than a brain teaser. 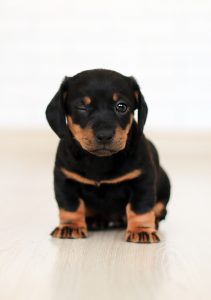 In the case of young dogs, there is also the fact that said signals could not be practiced long enough to be available in any situation in life. They often show behavior even during puberty: even what worked well before is suddenly no longer possible because the brain is too busy with “growing up”. On the contrary: it can be puberty that ensures that situations with which you were fine yesterday were overwhelming you today.

So what to do?

Leash the dog.
So I can slow down wild rushing carefully, but I can also use the leash to keep him away from me or my jacket sleeve. If it is really bad, I leash him somewhere and take a step aside so that he cannot jump or bite me.

Anyone who has already started to practice a relaxation signal in addition to the usual “basic obedience” is fine and can use it.

If the environment allows it (so it is not very stimulating), I can also just sit down for a moment, do the relaxation exercise myself and wait and see whether my dog ​​calms down too.

A few chunks of food that he can look for on the floor that he can “work through” can certainly help.

It becomes even easier if I incorporate such relaxation breaks into our walks every now and then: Just pause, take a little sniff, look at the area …

As far as possible, the shortest way home.

It can be difficult at first to assess when an activity should be better ended.
In addition to the diary, it helps to observe the dog very closely: what does it do just before it freaking out?

Oskar then started to seem defiant and unruly. Of course this is human, dogs are not defiant. But the fact that he looked like this was an important clue. If he then “picked up speed” – that is, he got faster, although he should have been tired, it was high time to go home.

So if your dog regularly gets his “wild 5 minutes”, it is definitely worth it to simply shift down a gear and see if it gets better. The method has the great advantage that you will not harm your dog under any circumstances. If he had an infection or a sprained paw, you would do the same thing without hesitation!

If that doesn’t work, or if “turning up” has already become a habit, a trainer can help you to find “blind spots” in the training plan and to practice calm. They can also assess whether it makes sense to consult a veterinarian to rule out health problems.
In most cases, the magic word is actually “rest”.